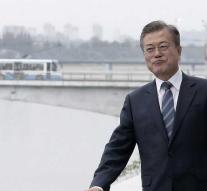 seoul - South Korean President Moon Jae-in is speaking to his US counterpart Donald Trump in Washington on Tuesday. Moon is in North Korea for a three-day summit with the dictator of that country, Kim Jong-un. The summit ends Friday. Moon then goes Sunday to New York reported news agency Yonhap.

He is expected to report on his conversations with Kim. Among other things, it has offered to dismantle missile installations under the supervision of foreign inspectors. And he has offered to close his main nuclear center Yongbyon. He may expect an American consideration for that.