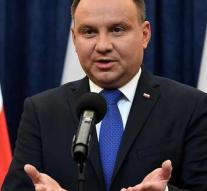 warsaw - Polish President Andrzej Duda has signed a controversial Holocaust law that makes it punishable to use the term 'Polish extermination camps'.

Poland is disappointed: concentration camps of the Nazis are systematically translated as 'Polish camps' because they were on Polish territory. But the country is just victim, Poland wants to emphasize.

The country did not have the most dead in the Second World War for nothing, but young people who hear the term 'Polish camps' immediately associate the Nazi horrors with the Polish people. Thus the government.