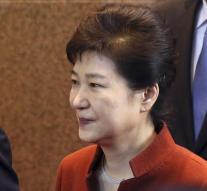 seoul - South Korean President Park Geun-hye has made a new genuflection in the political scandal in which it is in. She has offered Tuesday to revoke the appointment of the prime minister appointed by it and choosing to have a new prime minister to parliament.

Park is under attack by the alleged interference of her confidante and long girlfriend Choi Soon-sil with government affairs. Choi would continue to have abused its position, and the friendship with the president for personal gain.

On Tuesday there was a raid at Samsung Electronics in Seoul. Justice is investigating allegations that Samsung converted 2.8 million euros proposed by a company of Choi and her daughter. The money may be used according to the Yonhap news agency to pay for the horse training the daughter. She was previously a member of the national equestrian team from the Asian country.

The plaintiffs were seeking information on the relationship between Samsung and the Korean equestrian federation. That organization is suspected to have changed the rules to favor the daughter of Choi.