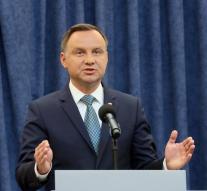 warschau - Polish president Andrzej Duda announced on Monday to veto a controversial reform of justice in the country. The parliament has already adopted those reforms proposed by the Government of the Conservative Government of the Party of Justice and Justice (PiS), but Duda must sign the law.

There has been pressure on Duda from various sides to block the reform. The European Union has even threatened with sanctions, because the independence of the judiciary would be undermined. For example, the members of the Supreme Court and a Supreme Court may be appointed by the government.