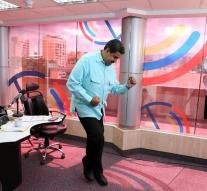 caracas - The economy is grim, and social injustice are terrible. But President Maduro of Venezuela keeps the spirits up with their own swirling radio show devoted entirely to the salsa. 'Salsa is the power of happiness,' Maduro shouts enthusiastically by the microphone. The opposition abhors it.

The radio show La Hora de la Salsa (The hour of salsa) is invalidated by an opponent as 'the orchestra of the Titanic. 'Opposition leader Henrique Capriles called the show a joke. 'He could well be more respect for the Venezuelan people may have,' says the British newspaper The Guardian.

Nicolás Maduro is a 53-year-old socialist who became president in 2013. But he is also a salsa fan with an encyclopedic knowledge of this dance. Twice a week he presents his radio program. In conclusion, he dances every time with his wife in the studio. The current president is the successor to the erratic Hugo Chávez, who has a TV show afforded, in which he sang country songs.,