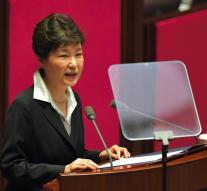 seoul - South Korean President Park Geun-hye would allow a second term through an amendment as president of the Asian country. She Monday let Parliament know that the time is ripe to discuss changes in the constitution.

According to the president is president of one term 'difficult to see the results of policies to maintain political continuity, and to be engaged in a clear foreign policy. '

It calls for the immediate establishment of a special committee to examine the amendment. According to South Korean law a president can serve only one term of five years.