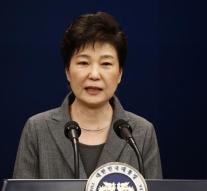 seoul - South Korean President Park Geun-hye has left it to parliament to devise a way they can resign her post. The president is in trouble with a girlfriend who would have abused the relationship in order to extort money from businesses.

Last weekend went in Seoul nearly a million people to the streets to demand the resignation of the president. In a short speech before the television said Park Tuesday that she only wants to resign if the parliament adopted a law after discussions between government and opposition parties ' to transfer the administration in an orderly manner and to minimize political unrest and a power vacuum ''.

According to the opposition, this only leads to procrastination. ' She puts the ball in the parliament, while they can simply resign, '' said Park Kwang-one of the Democratic Party.