Home / World / President of South Korea deeply through the dust 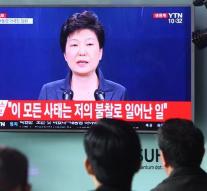 seoul - South Korean President Park Geun-hye's Friday again went deep in the dust of the political scandal in which its government is involved. She has said that she is fully cooperating with an investigation by the prosecutors to the interference in government affairs by her confidante Choi Soon-sil. Choi has just been arrested as any other employee of Park.

The president wants prosecutors to get clear what exactly happened and ensure that those responsible, including herself, should be punished if they are guilty. 'I'm here to blame and am willing to take my responsibility,' said an emotional Park. 'I lie awake at night of repentance. 'She offered her apology last week, but said that the influence of Choi had been pitched.

The opposition called the action from Park implausible. 'The president should not interfere in state affairs,' said Choo Mi-ae, leader of the Democratic Party of Korea, which calls for her resignation.