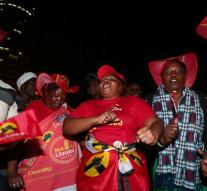 nairobi - Sitting President Uhuru Kenyatta has won the elections in Kenya. The 55-year-old businessman received 54.27 percent of the voters and could start his second and last five-year term.

On Thursday, the opposition still claimed that her leader Raila Odinga, 72, was declared president. The opposition did not trust the preliminary results and claimed that the votes had been void. According to international observers, there are no signals that the polling station has been manipulated. Kenyatta's most important challenger had to satisfy 44.74 percent.

The presidential elections were accompanied by some irregularities this year. Three people came through riots for life. Large-scale violence, as happened at the 2007 election, continued, however. Then more than a thousand people died in the East African country.