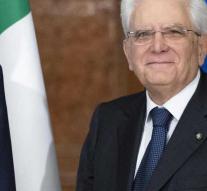 trapani - Italian President Sergio Mattarella personally interfered with the fact that 67 migrants were allowed to come to a Sicilian port after they had been picked up from the sea off the Libyan coast. Italian media report that Friday.

The Minister of Home Affairs, Matteo Salvini, had said that the boat with 58 men and nine women and children was not allowed to moor and 'the group of criminals' definitely could not put a foot ashore. But on Thursday evening it happened in the Sicilian city of Trapani.

The migrants had been picked up last weekend by an Italian tugboat off the Libyan coast. A number of them would have threatened the Italian crew so that they locked themselves into the bridge of the ship and alerted the authorities. The Italian coast guard took over the migrants at sea. Justice in Trapani is now investigating the case.

For Salvini of the right-wing populist party Lega, stopping migrant flow is a priority. Last month he stopped the arrival of ships from aid organizations. He now also wants to ban migrants who have landed on naval ships of European missions in the Mediterranean.