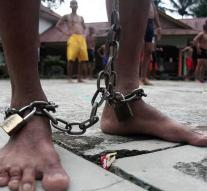 jakarta - Indonesia's president, Joko Widodo, ordered the police to kill drug traffickers. The president spoke of an emergency. 'Be firm in particular against foreign drug criminals entering the country and opposing arrest. Shoot them down, because we're getting some drugs in an emergency, 'said Widodo in a speech late on Friday.

He seems to follow the footsteps of his Philippine official Rodrigo Duterte. Duterte opened a bloody hunt for drug criminals a year ago. Numerous drug traffickers and people suspected to be killed were killed.