Home / World / President China and Z Korea speak each other 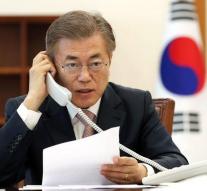 seoul - Chinese President Xi Jinping and the new South Korean president, Moon Jae-in, have exchanged a telephone call on Thursday about the situation on the Korean peninsula. The conversation lasted forty minutes and according to Moon's spokesman, for the first time, a Chinese president called a South Korean official to congratulate him or her, according to the South Korean press office Yonhap.

Xi and Moon agreed to further improve relations between their two countries. They were under pressure by the deployment of an American anti-missile system in South Korea. The placement of the THAAD system was a response to North Korean trials with atomic weapons and ballistic missiles.

In the telephone conversation with Xi, Moon said that the issue around the THAAD system can only be resolved if North Korea quits with provocations. Xi said that all parties should work together to reduce tensions around North Korea's nuclear and ballistic weapons.