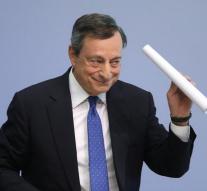 the hague - The President of the European Central Bank (ECB), Mario Draghi, is still coming to the Lower House after an earlier termination. He will meet President Khadija Arib first Wednesday, after which other MPs will talk about the ECB's policy.

Discussion includes the ECB's interest rate policy and the consequences and unwanted effects thereof, for example, for pensions in the Netherlands. The ECB's approach sets the interest rates at a historically low level, which again causes problems with pension funds.

According to Dutch Parliamentary Commissioner Pieter Omtzigt (CDA), Draghi's policy has caused a loss of 100 to 200 billion euros in the pension sector.

The arrival of Draghi was on the agenda before February, but he had to cancel at that time because of 'unforeseen circumstances.' '