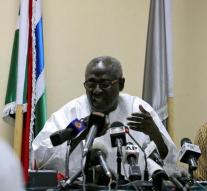 dakar - President Adama Barrow Gambia Thursday will return to his country. Has announced that one of his assistants Wednesday. Barrow was last Thursday at the Embassy of the Gambia in Senegal sworn in as president.

The inauguration was in distress in the neighboring country because did not want to resign the former President Yayha Jammeh. Jammeh eventually left last Saturday after countries of the West African grouping ECOWAS had threatened the country to invade.

The troops of ECOWAS have been entered Gambia to pave the way for Barrow.