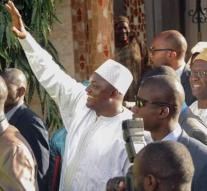 banjul - The Gambian president Adama Barrow on Thursday returned to his country. He arrived in the capital Banjul, eyewitnesses report.

Hundreds of people lined the road leading from the airport to the capital to welcome him. Many wore T-shirts with a picture of Barrow, blew whistles, beat drums and chanted 'We welcome you president, our hope, our solution', while Senegalese soldiers watched.

Barrow was last Thursday at the Embassy of the Gambia in Senegal sworn in as president. The inauguration was in distress in the neighboring country because did not want to resign the former President Yayha Jammeh. Jammeh eventually left last Saturday after countries had threatened to invade the country in the West African alliance Ecowas.

Eventually, the forces are still the country entered to pave the way for the arrival of Barrow. Earlier Thursday Barrow asked the West African troops to remain another six months.