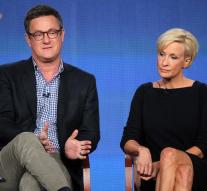 washington - Two American presenters questioned the mental state of Donald Trump on Friday. They complained in a column in the Washington Post newspaper that the president has an 'unhealthy obsession' for their program, Morning Joe.

The reason for the piece is a high-pitched battle with Trump. He called presenter Mika Brzezinski on Twitter ' low I. Q. Geschifte Mika ''. Her co-presenter Joe Scarborough was nicknamed 'Psycho Joe', Joe the psychopath. The duo opened a booklet about the run-up to that eruption.

White House officials would have warned Brzezinski and Scarborough earlier this year that gossip National Enquirer would publish a negative message about them. Trump would have been willing to let the article be deleted, provided that they would be ignored by negative government announcements.

Scarborough later said that the White House just kept calling with requests to apologize to Trump. 'It's extortion,' he complained. The president remembers those events very differently. Trump twittered that the presenter just flipped him back early. 'I said no,' said the president.