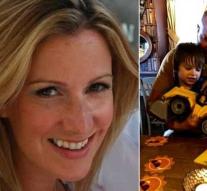 london - The English radio presenter Rachael Bland suffers from terminal breast cancer and has only a few days to live. Her son just two years old and will therefore hardly have any memories.

That is why she is now writing her memoirs in haste, so Freddie knows who she is later.

'In the words of the legendary Frank Sinatra- I'm afraid my time has come, my friends,' writes 40-year-old Bland on Twitter. 'Suddenly I get to hear that I have only a few days to live. Thank you for all the support I received. '

Together with two other women, Rachael created the podcast 'You, Me and the Big C' in which they talk openly about life with cancer. The podcast continues after her death.

In November 2016, the British presenter received the bad news that she had breast cancer. A long battle followed. In May this year she was told that the cancer could not be cured anymore, yesterday it was news that it will only be a few days later.

'It is now a real race against time to finish my book for Freddie,' Rachael said. 'If you need me, you will find me on my laptop while I drink liters of water. '