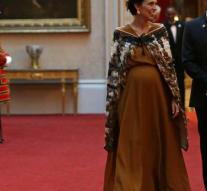 wellington - Premier Jacinda Ardern gave birth on Thursday of her first child, a daughter. She let herself know through social media. The 37-year-old Ardern was the youngest prime minister of the country ever when she took office last year. She is now the first New Zealand prime minister ever to give birth during her term of office.

Ardern gave birth in a hospital in Auckland. Her husband, the TV presenter Clarke Gayford, assisted her.

The New Zealand Prime Minister is not the first in the world to introduce a child to the world during her term of office. In 1990, the Pakistani Benazir Bhutto became a prime minister.