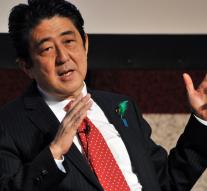 brussels - The European Union and Japan are expected to announce a political agreement on a free trade treaty on Thursday. EU President Donald Tusk announced Tuesday that Prime Minister Shinzo Abe has accepted an invitation on Thursday, before Abe travels to the G20 meeting in Hamburg Friday and Saturday.

The EU is represented by Tusk and the President of the European Commission, Jean-Claude Juncker.

According to EU sources, the parties would be close enough to an agreement on access to each other's markets in order to sign a principle agreement. But there are still negotiations on a number of sensitive issues, including the export of European cheese to Japan and the arbitration of disputes about investment.

Brussels also expects a strategic partnership agreement and will confirm to both parties that they adhere to the Paris climate agreement.