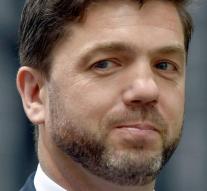 london - Stephen Crabb, who first British politician raised as a candidate successor to Prime Minister David Cameron, makes migration issues a priority if he comes to power. He writes in a column in the Daily Telegraph.

According to Crabb, the overwhelming message,, '' of the referendum that Britain should regain control over migration.,, So for me is freedom to travel a red line. ''

Crabb, in the Cabinet Cameron responsible for labor and pensions, says the judgment of the British people about the EU clear, there is no way back. A second referendum is exactly what he does not arise.