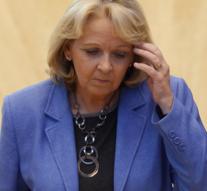 - Premier Hannelore Kraft of North Rhine-Westphalia has Germans of Turkish origin called for prudence in her state. Kraft is concerned about a possible mass demonstration Sunday in Cologne before the government of President Recep Tayyip Erdogan in Turkey.

Kraft on Thursday asked the Turkish conflict,, not make it to the chosen homeland in North Rhine-Westphalia, not your family, not your friends and not your heart. Everyone has the right to demonstrate, but please keep sensible and above all peaceful. Incite violence and hatred against others, we can not tolerate in any way. ''

The Turkish government has accused a political rival of Erdogan, the Islamic scholar Fethullah Gulen, of being behind the coup attempt. Gülen lives in the US and its movement rivals a long time with Erdogan and his AK Party over how Islam can serve the Turkish government and politics. Gülen's supporters among more strongly in the judiciary and education, but not within the Turkish Armed Forces. The army wants traditionally keep Islam out of politics.