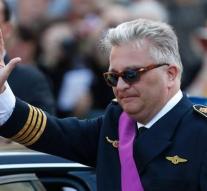 - Belgian Prime Minister Charles Michel wants Prince Laurent, King Philip's brother, to be punished. Some of his grants may be withdrawn this year. Reason is a photograph of Laurent in military uniform during the celebration of the nineteenth anniversary of the Chinese national army at the embassy in Brussels.

The 53-year-old 'enfant terrible' of the royal family put the picture on Twitter. According to the spokesman's spokesman, Monday against Belgian media, the government was not aware of Laurent's attendance at the diplomatic ceremony. Even if he had been invited personally, he should ask permission for the government.

It's not the first time Laurent does not attract that rule, nor does the palace know about his plans. In January, he was already called on Michel for the mat.