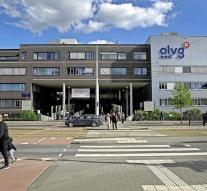 amsterdam - Amsterdam midwives report alarm over the scarcely shortage of staff in the OLVG hospitals. As a consequence, women in Amsterdam who are on the verge of regularly diverting to hospitals in Zaanstad or Amstelveen should tell several obstetricians to De Telegraaf.

A letter from midwives reveals that the OLVG 'struggles with the fusion', which means that staff shortages and long-term sickens are 'in control', according to the midwives. According to midwives, midwives are found to be denied at the hospital's door and have to call their pregnant client for an hour to get to another hospital.

'If a major hospital like the OLVG reduces deployment in two locations, it makes sure that there are other cities,' says one of the obstetricians who spoke the Telegraph. 'Even if women are already squeezing, it is often reported that pregnancy should still be transported to Zaanstad or Amstelveen in an ambulance. These are stressful moments, 'says a midwife. They emphasize that women in the OLVG West as well as in the East area are being refused women while sufficiently equipped redemption rooms are available.

Sophie Six, chairman of the Association of Midwives, calls the situation at the OLVG 'concern'. She recognizes the signals. 'I hear the same signals from all practices. There are really enough rooms, but because there are insufficient people, they remain unused and people are sent away. That's a shame. 'Tomorrow, an important delegation from the Ministry of Health, Welfare and Sport to Amsterdam and the Dutch Health Authority will be sent to the OLVG.

According to Tessa Scheffer of the OLVG, about 3500 deliveries are carried out annually at both locations. 'OLVG did more births this summer despite vacations and vacancies. We have taken special measures for this. 'She says that throughout the Netherlands, but certainly in Amsterdam, there is a huge labor market burden with specialized nurses and midwifery staff.