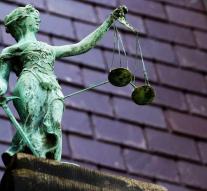 amsterdam - A 38-year-old man was resigned on Wednesday in suspicion that he would have robbed his pregnant ex-girlfriend in Leiderdorp of life. Nor does the Amsterdam court prove that he left her in a helpless state.

The suspect was previously sentenced by the Haarlem court to seven years imprisonment, also for falsifying a diploma. The latter proves that the court has proven and imposes two months imprisonment for him. Opposition to the man was claimed in appeal fifteen years ago.

The victim was found bloodless and lifeless in the stairwell of her house in Leiderdorp in October 2013. According to the court, no technical evidence was provided for the suspicion that the suspect was present at the stairwell at that time. Nor do there be witnesses or telephone data supporting this statement of the Public Prosecution Service. Experts could not indicate a woman's cause of death; The injuries did not constitute a statement for her death.