Home / World / Preacher from the US denies charges in Turkey 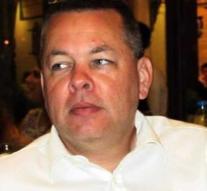 ankara - The American preacher who is trapped in Turkey has defended himself in court. Andrew Brunson called it 'disgusting' and 'shameful' that he is suspected of ties to forbidden organizations.

Brunson has lived in Turkey for more than twenty years, where he can now get 35 years in prison. The clergy denies all accusations. 'I help Syrian refugees, they say I help the PKK. I set up a church, they say that I got help from Gülen's network, 'Brunson told the court. He broke into crying at some point when he made eye contact with his wife.

Several unrecognized witnesses made statements to Brunson per video connection. The allegations ranged from cooperation with Kurdish terrorists to collusion with the organization of Fethullah Gülen, who is held responsible by Turkey for the failed coup in 2016.

The persecution of the clergy put the relationship between Washington and Ankara under further pressure. Earlier, President Donald Trump said that Brunson is 'on trial' for no reason.