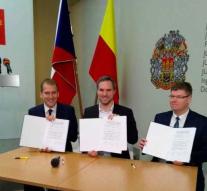 prague - The Czech capital Prague has been a mayor from the ranks of the Pirate Party since Monday. The new Mayor Zdenek Hrib signed Monday a coalition agreement with a citizens' initiative and a conservative party to govern the city. 'We are really on the threshold of change today,' says the 37-year-old.

The Pirate Party won 17 percent of the votes at the local elections in Prague in early October. Observers explained the success, partly because the party is a newcomer in politics.