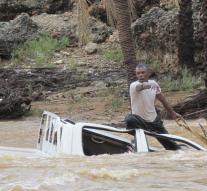 - While the armed violence persists, Yemen since Tuesday also plagued by natural disasters. An exceptionally powerful cyclone reaches the coast and especially loved home in the coastal city of al- Mukalla. Streets were flooded, houses have collapsed and thousands of people fled.

The inhabitants of al- Mukalla get hit hard. In April, their city was still the scene of heavy fighting between the army and fighters of al Qaeda in the Arabian Peninsula. The terrorist group was able to dislodge the military and has since been in control in any part of the city, where about 300 000 people live.

For cyclone Chapala has been warned by meteorologists. Local officials reported that some 6,000 people fled the coast and have sought higher area.

The storm raged on Monday on the island of Socotra, off the coast of Yemen. There were three people died and a hundred were injured. On victims in southern Yemen is still unknown.