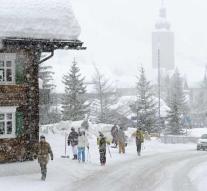 salzburg - The snow chaos in Austria has led to major problems with the power supply in many places. Thousands of households in the worst hit areas were without electricity on Thursday.

In Ennstal in Steiermark, a central high-voltage line has been destroyed by fallen trees, energy company Energie Steiermark reported. The residents of Ennstal could still receive power through an alternative connection.