Home / World / 'Potato Woman' will not 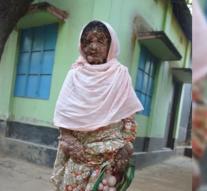 - Neighbors call it the 'potato woman 'and her grandson three starts crying when he sees his grandmother. Life is lonely painful for the woman whose body is covered with hundreds of tumors. But Hosineara Begum from Bangladesh did not always look so frightening.

What started with only a few minor bumps in her face, expanded two years after the birth of her son on her body. Everywhere appeared tumors; some as big as tennis balls. This was reported Daily Mail.

No one around her would have anything to do with the badly disfigured woman. Doctors around her can not do anything for her and a treatment in the city will cost too much money. With her aching body and fearsome appearance, she hopes fervently for help from above. 'I have no hope. I want to be rid of this pain and only God can help me. Death is better than this horrible pain. '

The tumors on her body are likely caused by the inherited disease neurofibromatosis wherein the production of a particular protein can lead to uncontrolled cell growth. In the Netherlands, 4000 to 6000 people this disease. Where has only suffered from mild skin abnormalities, it may apply to the other become a complicated disease.