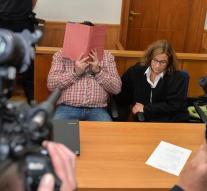 oldenburg - The murder of patients sentenced to life German ex-nurse Niels H. might be responsible for the deaths of dozens of people. In 27 of 99 unearthed deceased patients of the hospital Delmenhorst remains of a heart drug discovered, said police chief Johann Kühme Oldenburg Wednesday.

According to him, Niels H. responsible for the deaths of several people in the hospital in Oldenburg. The study goes even further.,, We assume that the real number of victims of Niels H. is much higher, '' a police spokesman added.

The former nurse was February last year in court for the death of thirty patients he would have injected an overdose of heart medication. The now 39-year-old finally got a life sentence for two murders, two attempted murders and inflicting grievous bodily harm.