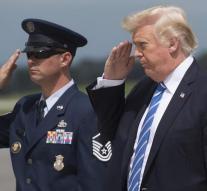 washington - US President Donald Trump holds a televised speech on Monday night to explain his Afghanistan strategy. The New York Times and other US media reports that Trump will probably announce that he will strengthen the US troops in Afghanistan with a few thousands of soldiers.

The United States currently has about 8400 soldiers in Afghanistan. Possibly, Trump wants to send a small four thousand additional soldiers to better train the Afghan army and help operations against the Taliban and other militant groups in the Central Asian country.