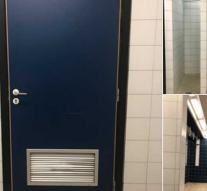 ghent - The images that surfaced hundreds of women in saunas, swimming pools, dressing rooms and other public places earlier this week may also include Belgian victims. On the images that the NOS investigated, a twitterer believes that the dressing room of the sports hall of Hogeschool Gent is recognizable. HoGent has now filed a complaint

NOS journalist Joost Schellevis rolled the ball after a call on Twitter. To identify the places where the voyeuristic images were made, he posted a number of screenshots on Twitter. The images show a plastic cup from the Belgian beer brand Grisette, which made the journalist suspect that it was a place in Belgium. An observant twitterer noticed that the blue tiles on the images are very similar to those of the sports hall of the Hogeschool Gent.