Home / World / Possibly 100 deaths from hurricane in the Philippines 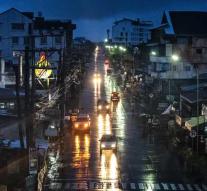 manila - Hurricane Mangkhut may have killed a hundred people in the Philippines. A barrack with forty miners near the city of Itogon would have been engulfed by a landslide, the mayor announced. Another 32 residents of Itogon would not have survived the natural disaster.

Elsewhere in the Philippines, 29 people were killed by Mangkhut. According to a government spokesman, people are still missing.