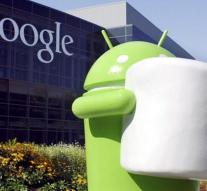 - Since the introduction of Cupcake Google has all new versions of Android given the name of a sweet treat. Possible that the Internet giant for versions after Marshmallow the audience will ask for suggestions.


During an interview at the University of Delhi Google CEO Sundar Pichai was asked why no Indian delicacies are on the list. Pichai gave his mother to ask for suggestions, but then came the possibility of an online poll to come.
The name Nutella is obvious, since the company has already demonstrated a KitKat brand not to shun. Nougat also seems like a good contender. But maybe there are better suggestions online.
NEW