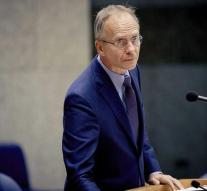 - Minister Henk Kamp of Economic Affairs is considering providing funding for rural areas in our country who do not have fast internet. This is evident as Tweakers from answers to parliamentary questions to the Minister of the SP.

In our country, about 300,000 businesses and households that do not have fast internet. This relates to a compound having at least a download speed of 30Mbit/s. Camp will not immediately open up the subsidy tap.

According to him but Internet companies have come up with initiatives. " The market is the first move ", he writes. " If the market fails to deliver what is needed , then there is a possibility for financial support from regional or local governments. "

There are already initiatives to provide the outer regions of fast Internet. This relates to the internet over 4G. Kamp make farmers in Flevoland already use them.

The government already supports a number of such initiatives.