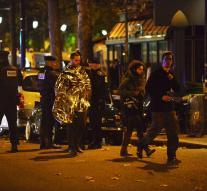 - A man from Montenegro last week was arrested in Germany with a car packed with Kalashnikovs and explosives, was probably on his way to Paris to take part because the attacks on Friday.

The 51-year-old man walked past Sunday against the light during a routine check on the highway in Bavaria. In his Volkswagen Golf with Montenegrin registration officers found eight Kalashnikovs, two pistols, two hand grenades, 200 grams of TNT and a revolver.

According to Bild, the police had evidence that the man was on his way to Paris. Let the police know that they have been informed after the arrest Interpol, so that would mean that the French security services knew about it.

The suspect is stuck.