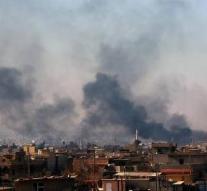 mosul - An airstrike by international coalition fighting IS, may have resulted in civilian casualties in Iraq. A van in the parking lot of 'what later became a medical center turned out to be' came under fire, reported by the US-led coalition Thursday.

presumably were in the bus IS fighters, said a statement. But may have also killed civilians.

Netherlands is also part of the coalition, but currently do not fly Dutch F-16s over Iraq. However Dutch soldiers guarding the Belgian F-16s bombing IS took over.