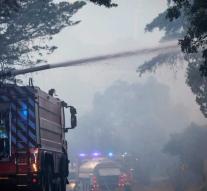 lisbon - The Portuguese authorities control the nature fire in the Algarve. 'At the moment there is no longer any risk that the fire will spread,' said the head of the operation.

Firefighters carried out their extinguishing activities during the relatively cool night and early morning. They stay in the area in case the fire flares up again. In total, some 1450 firefighters, 460 fire engines and fifteen airplanes were involved in putting out the fire, which broke out about a week ago during a heat wave in the tourist area.