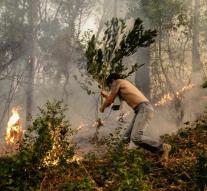 lisbon - Portugal has called for help from Europe for combating the many natural fires. On Sunday there were more than 3,000 men working for extinguishing work, but that is insufficient to constrict the fire seas.

In the coming days, the situation may be even worse due to the continued warm and dry weather combined with a hard wind. The Minister of Interior Constanca Urbana de Sousa therefore called on the other EU countries to send firefighters and firemen.

Portugal is being fought this summer by fires. So far, all 64 people have cost a living. Over 140,000 hectares of forest are laid in the ashes. That's more than three times as big as the average over the last ten years.

According to press agency Lusa, there was a record on 268 places in the country on Saturday. The control services run overtime. It was often successful, but the fears continue to recharge the weather due to the extreme weather conditions today or tomorrow. In the central district of Coimbra, the state of emergency has been declared as well as in four smaller municipalities in the region.