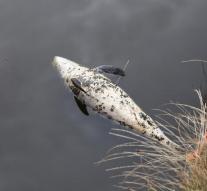 - In Nauernasche Vaart in Krommenie in Zaandam's Sunday morning found a dead porpoise. Presumably refers to an animal that for a while swam in the northern Dutch waters.

Employees of SOS Dolphin Foundation are on and bring the body to the University of Utrecht for research. Possible can be determined the cause of death there.

The porpoise was about two weeks ago for the first time detected in the canals of Den Helder and swam farther North Holland through the channel along the N9. Last Tuesday the animal was last seen alive in Krommenie.


Harbour porpoises live in the North Sea, but from time to time it happens that they are warming up the Dutch waterways, said a spokeswoman for SOS Dolphin.,, Sometimes they make it and they manage to return to sea, but it is not. ''

In this case swimming in the North Holland water, the animal may have yielded too much stress.,, There, they can not stand. And freshwater porpoises have problems with their skin. But whether the cause of death, we do not know. Hopefully we learn from the study. ''