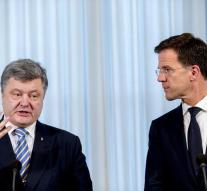 - The newly elected US president Donald Trump is busy. After being on Monday with Prime Minister Mark Rutte and spoke with Russian President Vladimir Putin, he performed Tuesday a telephone conversation with Ukrainian President Petro Poroshenko.

Porosjenko and Trump have agreed a tête-à-tête. The Ukrainian leader stressed in the interview that the support of the United States is essential in light of the ' Russian aggression ''.

When the discussion between Trump and his Ukrainian counterpart occurs is not yet known. The Ukrainian government make preparations for a visit by Porosjenko early next year in Washington.