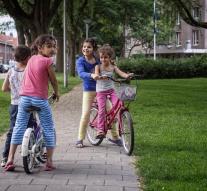 leidschenveen - The Dutch population struggled with natural shrinkage in the first months of 2017, but grew. According to the Central Bureau of Statistics, about 40,000 babies were born in the first quarter, while over 42,000 people died.

The fact that the total population grew by 19,000 persons is due to immigration from abroad. In the first quarter of this year around 54,000 people settled in the Netherlands. About 33,000 people left correctly.

The fact that more people die than they are born, according to the CBS, have several reasons. Thus, there was a relatively high mortality rate. 'During the first ten weeks of the year, nearly three thousand people died more than in the same period last year,' said the statistical office.

In addition, Dutch women have on average fewer children than in the past. 'In 2016, women received an average of 1.66 children. Not ten years ago, there were 1.77 ', concludes Statistics Netherlands. 'When women would have received as many children as before then there would be no natural shrinkage. ''