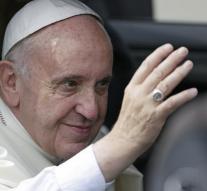 krakow - Pope Francis on Wednesday once again responded to the many abuses, the major threat and the ongoing violence.,, We should not be afraid of the truth to say that the world is at war because they have lost the peace, 'said the Roman Catholic leader at the start of his five-day visit to Poland. That allowed the faith to say its not charged.

,, I'm not talking about a war of religions. All religions want peace. It is a war for power and interests, to money, to natural resources. '' Francis will be in Poland include attending the World Youth Day and visit the former death camp Auschwitz-Birkenau. President Andrzej Duda welcomed him at the airport in Krakow.