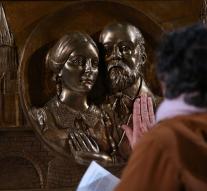 - Pope Francis declares Sunday for the first time in the history of the Roman Catholic Church a couple sacred. It's about the French couple Louis and Zelie Martin . The two lived in the 19th century and were the parents of the famous French saint, Saint Therese of Lisieux .

Martin The couple had nine children, four of whom died at a young age. The five others, all girls became nuns. The youngest of the five was Theresia (then Thérèse ) who died at the age of 24 in 1897 of tuberculosis.

She was canonized in 1925 and is still in many places honored for her simple and spiritual life. The couple Martin is canonized for his " marital and family spirituality " according to the Vatican. The ceremony takes place in the papal chapel during the meeting of bishops and cardinals under way in the Vatican.