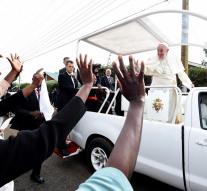 - Pope Francis will Sunday visit to the Central African Republic. It is the first time that he is doing to a country that is at war. The republic has to do for years with violent clashes between Muslims and Christians.

In the capital Bangui, according to Human Rights Watch since the end of September a hundred people died in violent outbursts. For the Pope's visit have taken extra security measures. About 500 police officers and more than 3000 soldiers from the UN peacekeeping Minusca be used to guide the visit in the right direction.

Both the Christian majority and the Muslim minority in the African country is looking forward to the visit. They hope that the pope comes with a message of peace and reconciliation.