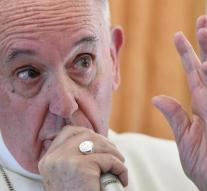 rome - Pope Francis believes that women 'in many things are better than men,' but priests they will respect him never. As he left Tuesday no misunderstanding. 'The last word is already said by Pope John Paul II and remains so,' said Francis.

A journalist on Tuesday with the pope meevloog from Sweden to Rome then asked him if he meant that it 'really never, never' happen. 'If we carefully read the Letter of Pope John Paul II, it there it looks like,' Francis replied. His response is in line with church doctrine, but certainly as Francis had itself previously said.

Lots of space left have been canonized pastor nor his successors. In 1994, John Paul II wrote that the church simply 'does not have the authority to ordain women to the priesthood and that will always be held this opinion by all the faithful of the Church. '