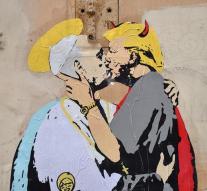 rome - Two weeks before Donald Trumps visit to Pope Franciscus, an artist in Rome depicted the two kisses in a life-sized mural at the Vatican.

The pope is pictured with an aureol and the American president has devilish rings, a gold watch and a gun in a holster. The two kissed each other to the mouth.

On the robe of the pope is the text 'The Good Forgives Evil' and the work is signed with 'TVBoy', which would be a pseudonym for the street performer Salvatore Benintende.

On May 24, Trump met Pope Franciscus during his first foreign trip as president. Furthermore, the American is also doing Saudi Arabia, Israel, Italy and Belgium.

In the streets of Rome, more popal murals appear. They are usually removed quickly by the cleaning service.

Previously, the holy father was already depicted as Superman and as a crazy graffiti artist. The municipality is more often criticized because this type of art is quickly removed while ugly graffiti often persists for many years and waste is often not retrieved.