Home / World / Pope in Portugal for a two day visit 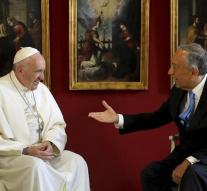 monte real - Pope Franciscus was received by President Marcelo Rebelo de Sousa on Friday afternoon at the start of his two day visit to Portugal.

Shortly thereafter, the church head arrived at the Monte Real military airport, where he was welcomed by a cheering crowd of hundreds of believers. 'Long live the pope, long live the pope,' they sang as he stepped out of the plane.

The pope then goes by helicopter to the 30-kilometer-long town of Fátima. In that pilgrimage place, Saturday is celebrating the hundredth anniversary of the Mary's appearance. 'This is a special trip,' the pope said to journalists who escorted him on the plane.

Fátima is 130 kilometers north of the Portuguese capital of Lisbon. The town expects hundreds of thousands of believers. The highlight of the Pope visit is Saturday. The eighty-year-old Franciscus will then celebrate a miracle in the sanctuary and declare the two of the three shepherd children to whom the Virgin Mary appeared for the first time a hundred years ago.