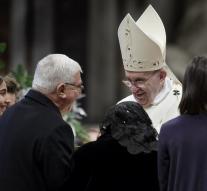 rome - ,, The good always overcomes, even if it is weaker in some moments or disappeared. 'So said Pope Francis Thursday during a oudejaarsmis in St. Peter's Basilica in Rome.


,, We can not forget that many days were marked by violence, of death, of the suffering of the innocent and of refugees who had to leave their homeland. Yet this year were many gestures of mercy, of love and of solidarity , according to the Catholic prelate.
After his sermon to praise: be thankful Te ​​Deum was sung, after which the Pope visited the Nativity scene in St. Peter's Square.
NEW