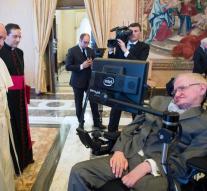 - 'God is superfluous. For the origin of the universe, we do not need God as an explanation. 'The world-renowned British astrophysicist Stephen Hawking who made these statements ever was Tuesday in Rome hosted by Pope Francis.

Hawking (74) the last few days was present at a meeting of the Pontifical Academy of Sciences. The scientist is a member of this academy. The Pope (79) took the opportunity to call Hawking to build up an ecological society. Simultaneously, the prelate accused not to listen international politics to the warnings from scientists about the environment and planet.

'There is no evidence that God does not exist. 'With that statement of Hawking the pope may be comforted. Man has meanwhile another thousand years to go on this planet. Than the earth and humanity must move to another planet, says the astrophysicist.